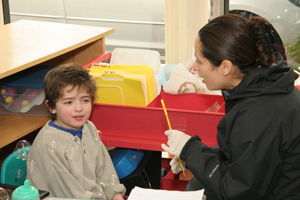 “Your child has autism.”  With those chilling words parents throughout Westchester began the frantic quest for answers to the question, “what is autism?” while having to search for programs that could possibly help their child become a part of their world.  In the early 1990s that quest led largely to ineffectual interventions that were framed by the misguided belief that autism was a psychological disorder.

As with many medical issues affecting children, it is the parents who ultimately take the reins and guide the educational and scientific establishment down a more effective path.  And parents are keen to share information and solutions with other parents.

This is where FECA’s journey began: with parents coming together in growing numbers to share what they had learned was most effective.  Most had come to know this through a book written by another parent, Catherine Maurice.  Her story, Let Me Hear Your Voice recounted her quest to obtain services for her two children, which led her ultimately to applied behavior analysis (ABA).  She needed  to hire therapists and find trained supervisors who could establish and run an intensive one to one program in her home.

An ABA program requires an intensive, highly structured curriculum using rewards intrinsically motivating to the individual on the autism spectrum.  A one to one teacher to student ratio is a critical requisite to maximize learning.

Parents in Westchester began adopting this same approach, often advertising through local Pennysavers to find potential therapists who could be trained.  Out of this network of parents a small group of eight families came together with the hard-earned understanding that running a 40-50 hour a week one to one program in their homes could not be the ultimate answer for the entirety of a child’s education.  A school was needed.

Parents had already gone to their local school districts for help and guidance and were told that the one to one intensive model was not possible through public funding.

In 1994 the Foundation for Educating Children with Autism was incorporated.  The eight families quickly divided up the necessary tasks:  obtaining a site; locating and hiring  a director to run the program; establishing an ABA curriculum; raising substantial funds to make all this possible.

Initial financial support for the mission came from families and friends, but the principal resources to fund a site and staff came through what became an annual two day educational and medical conference.

The first in 1994 was headlined by the rock star of the ABA movement, Dr. O. Ivar Lovaas, a UCLA professor who had developed and run ABA models for children on the spectrum and had documented their astounding success.  Parents came to the conference at SUNY Purchase from all over the country and  abroad.  A second conference with Dr. Lovaas followed the same year.

The second day of each conference featured representatives from the medical community who provided parents and educators with the latest information on  neurological research conducted throughout the world.  The sessions were so highly regarded that individuals in the medical community could obtain CME credits through their attendance.

The annual conferences continued for the next 7 years and included partnerships with the National Alliance for Autism Research, the Seaver Institute at Mt. Sinai and Westchester Institute for Human Development.  They not only raised the bar for what parents  came to expect from the educational and medical community but provided the pivotal funding needed to open the school.

With all of the key components in place, the FECA Board faced one last potentially fatal obstacle.  The state had established a moratorium on charter schools.  A private option was possible but it was decided early on that attendance at the school would not be conditioned on a family’s ability to pay.  Students would be referred through their local school district and funding would come through this channel, ultimately supporting a classroom of six children, one teacher and three aides.  The additional two aides needed for the one to one structure would be provided through FECA along with funding for the administrative and educational directors.

A chance meeting with a firm’s client brought then FECA President Andrew Schaffran to the Devereux Foundation.  Devereux, the largest foundation serving the developmental disabled was then exclusively a residential program.  A series of lively meetings ultimately persuaded Devereux New York to sponsor the school.  A memorandum of understanding  stipulated that this would be a publically funded private school under the Devereux charter, committed to  ABA principles and curriculum, and that FECA would annually provide the funding to make up any shortfall required of the one to one staffing.

After substantial reconstruction of an office building in Chappaqua, twelve children walked into the Devereux Millwood Learning Center (DMLC) in 1996. Two classrooms of 6 children each quickly grew into four of 24 and soon the number grew to eight classrooms of 48 children.  Most came by bus from towns throughout Westchester, and some a greater distance from New York City.

Each year attention was paid to what was needed to maintain excellence through the active collaboration of the FECA board with Devereux staff.  A kitchen to teach daily living skills was built, a computer lab created, and a library.  A playground was built through funding from the Bradley Spencer Parlo Foundation.

As the population grew in age it became clear that community integration was essential for students to learn critical skills.  Over the course of a decade, eight vans were purchased, making it possible for staff to take students out into the community for both recreation and teaching.

At age 14 students who are not receiving a NYS Regent’s diploma are required to have an Individual Educational Plan in place that includes vocational training.  A vocational director was located and hired and students began their first forays out into the business and nonprofit world where they could learn and practice vocational skills that would one day serve as the basis for potential employment after graduation.

All of these critical components of the school were made possible through the leadership and funding by FECA.

In addition to the annual conference, a Westchester based fundraising dinner was held each year and soon after, a second New York City based fundraiser was held. The local event held in the fall provided families and long time supporters with a festive, often costumed themed evening to celebrate the progress that students were making in the school.  The city based event provided an opportunity for the business community to demonstrate their support.  Substantial funds were also raised through grants from the metropolitan New York business and nonprofit community.

In 2014, after two decades at the Millwood site, DMLC moved to a state of the art facility in Mt. Kisco, New York and with that became Devereux CARES.   FECA provided funding for the security system which also enables parents to privately observe their child’s classroom.